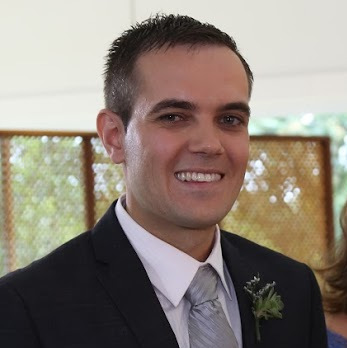 Douglas de Senne Machado was born to a SDB family in Joinville - SC, Brazil on June 25, 1983. Even before he was baptized at the age of 15, as a testimony he had accepted Jesus as his Lord and Savior, he was already helping the local church's Youth Ministry as secretary. He has also served for two terms in the National Youth Leadership board, as treasurer and as vice-president (2014-2018).

In January of 2011 Pastor Jonas Sommer introduced Kamilla Bernardi to Douglas, with whom he fell in love and got married in November of 2013. They now live in Curitiba and are members of the Bocaiuva do Sul SDB Church.

Since 2011 Douglas has had several opportunities to serve as English to Portuguese translator for Pastors Dale Thorngate (former WF president), Andrew Samuels, David Taylor and Brother Rob Appel during TIME seminars in Brazil. The Missionary Society invited him in 2015 to join Brother Clinton Brown in a mission trip to Mozambique to serve as a Portuguese translator. Douglas was the Host Committee chairman for the World Federation Sessions in 2017, which took place in Curitiba - PR - Brazil.